So, something that has been completely frustrating to me lately is the level of cattiness among women. I literally have not encountered, nor observed such ridiculousness since high school. Now, I’ve been fortunate. While every once in a while I have to deal with a complete bitch (which is 99% of the time for no reason-obviously their issue), I have been blessed with an amazing core group of girlfriends. We’re talking female friends literally since the womb. Not “frenemies”, true best friends. And numerous acquaintances. Kindred Spirits. I recognize I’m blessed. I know many girls who have not been so fortunate, and one example is a new friend I’ve made. A kind girl, who is starting a new friendship with me and letting it be known to me everyday she “hates girls.” I can’t even tell you how many times she has said it in the few months I’ve known her. It saddens me. On one hand, I’m obviously going to have a wall up, cause how can you be friends with a girl but hate them at the same time? On the other hand I feel for her cause she has obviously had no positive example of female friendships, so I need to set a new example. I know women can be haters, but we are not all like that and I will fight that sterotype. A real hater is a recent incident that I personally encountered. A girl who is working with me has not been nice since day one. Literally my first day of training she rolled her eyes at me, made snarky remarks and I even caught her talking about me. She’s made it clear she’s not fan, we’ll just put it that way. Now, I don’t expect her to like me. You can’t win them all, but at work I do expect respect and courtesy. I have a close friend that had a similar experience. No matter what she said or did there was this female co-worker that had to make horrible digs at her. At the end of the day I believe the co-worker was just being jealous, but she had no right to make my friend annoyed and uncomfortable. Another best friend works in an environment where the women have not been welcoming at all. She’s been on the job for only a few months, and they still disclude her and act as if she is non-existent. She is one of the nicest people I have ever met and has tried to interact with them to no avail. At the end of the day she and I both know It’s their loss, not hers.

What good does hating on other girls do? Seriously? No matter how many heinous bitches I’ve dealt with in my life, I would in no way, shape or form think to take that out on another woman. All that does is lead to a vicious cycle of hate. That is no different than dating a horrible guy then taking that out on the next boyfriend. We need to support each other! Build each other up! None of that stupid eyeing up and down, catty, jealous, ridiculous behavior. The bullying and hating really needs to stop. It’s stupid. You may be the most beautiful woman in the world, but if you’re hating on others you become so ugly. And you’re missing out on a chance to make a wonderful new friend.

Think of all the great examples of Girl Power out there: Spice Girls, ‘Sisterhood of the Traveling Pants’, The Go-Go’s, ‘The Babysitters Club’, ‘Friends’, ‘Designing Women’, ‘Divine Secrets of the Ya-Ya Sisterhood’…I could go on, but you get the drift. Unfortunately right now with the rise of “Reality” television popularity, drama and bitching is all the rage. How often do you see all the women on ‘RHOAnyCity, ‘Greedy Wives of Former Ball Players,’ or even back when that terrible show “The Hills” was on be genuinely kind, compassionate and helpful to each other? It’s literally nothing but name calling, weave (or wig) pulling and self-centered childish behavior. This is what we’re teaching younger generations how to be a woman and a friend?! You have got to be kidding me!!!! No wonder bullying has spun out of control! No wonder younger girls “hate” other girls! I’m also appalled that a lot of this behavior on television is coming from women over the age of 30 and that are mothers. Great example you’re setting geniuses.

As women we have to go through so many changes and experiences in life. Doesn’t it feel good to know you’re not alone?! I don’t know what I would do if I didn’t have my mother, Grandmother and the many girlfriends I have to dispense their wisdom, opinions and support. Even if you have just one close girlfriend, you still have that person that feels your pain! The person you can ask relationship advice, how to cook something or just meet for a happy hour drink to relax and talk about the week or your even your goals and dreams. Remember girls spread kindness and support to each other, cause we chica’s need to stick together!

“Beauty is not in the face; beauty is a light in the heart.” ~ Kahlil Gibran

“Lots of people want to ride with you in the limo, but what you want is someone
who will take the bus with you when the limo breaks down.”  ~Oprah Winfrey 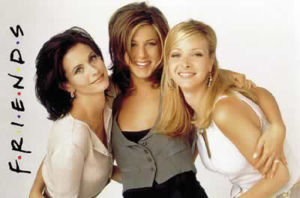