Finally back in Cleveland where it belongs, the Rock Hall Induction Ceremony was a few weeks ago, but is airing this weekend on HBO. As a Freelance Reporter for TV20 I was fortunate to get to cover it. Actually, fortunate is too small a word. It was a dream come true opportunity! There I was, just a few feet from the artists I had long admired and have been influenced by. The first big interview of the night, and one of the absolute greatest experiences of my life, was meeting Alice Cooper and his wife Cheryl. I have loved Alice since I was a little girl. I still remember being a kid and singing along to “School’s Out” “Feed My Frankenstein” “No More Mr. Nice Guy” and on and on with my pops. He’s the one who got me into Alice from the start. So there he was, coming right to me. He and his wife were two of the most composed, gracious and beautiful human beings I have been in contact with. At this point I can’t even tell you what I asked him cause the experience has become a blur (but check out my interview on TV20 this month. I know, shameless plug.). All I remember was thinking his answers were perfect and I loved how he made sure to introduce his lovely wife. Which I then in my total fan dorkdom told her I loved their E! Special (Rockstar Wives) and how I have tremendous respect for both of them. And I love her shoes. They thanked me and proceeded into Public Hall for the event. As soon as they walked away I couldn’t help but jump up & down in little girl giddiness. It’s not that I was star struck by them, it was that I can cross another goal off my Bucket List because I met THE Alice Cooper! 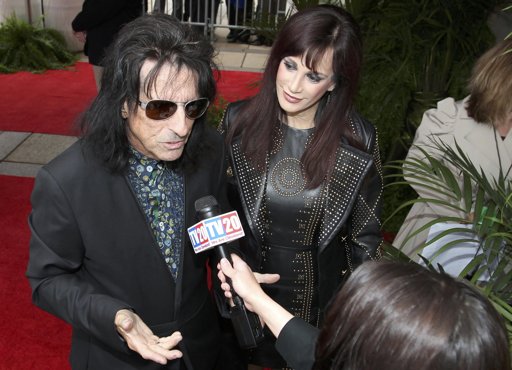 The next interview I scored was Matt Pinfield of MTV/ 120 Minutes fame. Long time music critic and aficionado. Again, I’ve been a fan of his for a long time. One of my ultimate dream jobs has been to be a VJ. I can be a reporter/TV host and be around musicians the whole time?! Yes, please! So anyways, Matt is one of those influential VJ’s to me because his knowledge of music & the artists is insane. I could only hope to have a forth of his knowledge and experience. He gave great answers to my questions, but the one that sticks out the most was the final question I asked him: “Who of today’s newer artists do you think has potential for future rock legend/Rock Hall Induction potential?” His answer? Akron, Ohio’s own The Black Keys! He listed a few other artists as well, but said he appreciated the authenticity of The Black Keys.

So then it was off to the Press Room!

First up was Smokey Robinson who talked about his longtime friends and back up group The Miracles. They were finally being inducted, along with a few other back up groups (more on that later). He told of how they met and how they were one unit. They were happy for Smokey when he was Inducted years ago, but he always felt they should’ve been Inducted with him.

Then legendary music exec and producer Barry Gordy came on stage. Not going to lie, thanks to watching ‘Jacksons: An American Dream’ a gazillion times I was expecting Billy Dee Williams to appear. I’m only half kidding haha. Anyways, Barry told a great story of how he first discovered Smokey and The Miracles and apparently Smokey thought Barry was auditioning for the group!

Then 2012 Inductees The Red Hot Chili Peppers came out! They were humorous, sarcastic, open and perfect. They gave props to former members and talked about their love of playing together for 30 something years.

After the Chili Peppers spoke, Q?estlove of The Roots came out and talked about the first time he heard the Beastie Boys. He was funny, charming and cool. I wish he could’ve talked more to us because he was that cool and interesting.

Next up was ZZ Top who Inducted Blues legend Freddie King. They talked about his influence on them and a few stories of their time with him. During the Induction Freddie’s daughter told a great story about the first time she realized her father was a musician. She and her sibling had been running around the house and accidentally broke his Les Paul guitar. A few days later she got to finally see him play live and was like, “oooh that’s why daddy was so mad we broke his guitar!” It was a very sweet story she shared, and moved the crowd.

Sarah Barellis came in for a quick photo-op, but during the show she performed the tribute to Inductee Laura Nyro. Now, I haven’t been able to get into her music yet, but her performance blew me away. She embodied Laura perfectly. It definitely makes me want to check out her non-radio songs more. And she looked absolutely beautiful.

So I’m watching the simulcast from the room waiting on the next celebrity to come out and they are starting the tribute and induction of The Faces/The Small Faces. Since Rod Stewart was out sick I wondered who they would get to fill in. Much to my great surprise they brought in Mick Hucknall from Simply Red! I’m a huuuuuuuge Simply Red fan. Like in my top 10 fav bands of all-time, and to me one of the most underrated in America. He nailed the performances and then, there he was just a few feet from me in the press room! He didn’t really talk since it was a moment for the Faces, but just seeing him up close made me so giddy! I later Tweeted him asking if Simply Red would be going on tour. He never responded but he started following me! Still can’t believe it.

After The Faces, 2012 Inductee Donovan came out. He is the most poetic and eloquent speaker I have ever encountered. And extremely charming.

LL Cool J came back just for a quick photo-op and he’s as gorgeous in person as he is on TV.

As he left the stage Chuck D came out. He walked up and sat on the edge of the stage and gave a great talk about how radio-particularly Urban radio- is doing an injustice to music, and how BET is doing a disservice to music as well. He said radio needs to give local artists a voice and stop playing, well, crap. He was thought-provoking, interesting and honest. I gained even more respect for him after his interview.

Then last-but certainly not least Guns N’ Roses came out! It was so amazing to see them in person. Their induction performance kicked ass (as expected)! Miles Kennedy of Alter Bridge filled in for Axl Rose since Axl decided he was too cool for the Rock Hall. Miles blew me away! And he did his job as front man, but also stepped back and let the actual members be the spotlight. I’m a huge Slash and Duff fan, but I was really happy to see Steven Adler doing well enough to get out there and play and enjoy the moment with the guys. 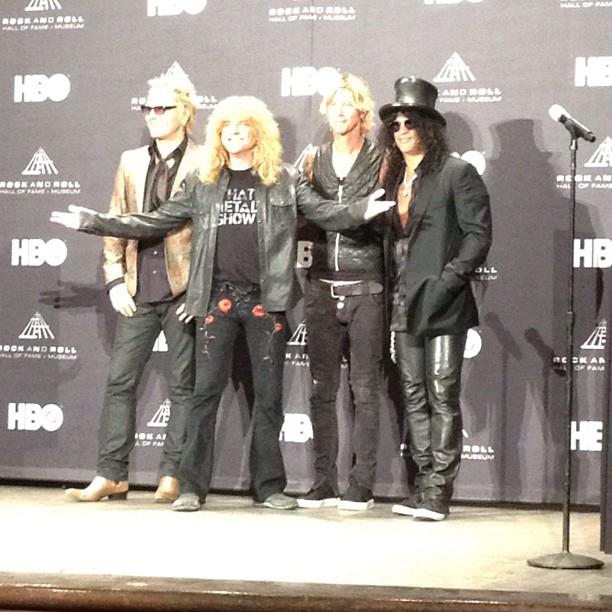 Although the following artists didn’t come to the press room, here’s my other thoughts on the night:

Green Day did outstanding opening the show. As soon as they went out there they told everyone to “Get off their Fucking Asses!” Perfect way to kick off the night!

I was bummed that my shero Carole King didn’t come back to the press room, but her speech about Inductee Don Kirshner was beautiful. And she still looks fantastic!

Speaking of fantastic women, Bette Midler gave an incredibly moving speech/tribute to her idol and 2012 Inductee Laura Nyro. Her stories of Laura were so descriptive you felt like you were in New York City with Laura and Bette. When Bette got choked up I got choked up. It was the first of three times that night that it happened to me.

The next time I was moved to tears was during the Induction of the bands: Miracles, Crickets, Comets and The Famous Flames. When Bobby Bennett of the Famous Flames (James Brown’s backing group) gave his thank you speech he started to cry and pointed out that he is the only surviving member. It broke me. Here he was getting this great honor, and his fellow band mates (and long time friends) were not here to enjoy it with him. I’m sure James and the guys were there with him in spirit.

When Red Hot Chili Peppers got inducted at the end of the night Flea got choked up when giving his thank you speech. I don’t know if it was his poignancy or my exhaustion by this point (or a combination of the two) but I was misty eyed again.

Over all the Inductions were outstanding. Everyone with the Rock n Roll Hall of Fame and Museum and at HBO did an outstanding job. I can’t wait to get over to the Hall to see what artifacts from this years Inductees are up! And make sure you catch the Induction Ceremony when HBO airs this weekend!!