They say there’s light at the end of the tunnel. You may be going through hell, but keep going cause you’ll get out before the devil knows you’re there. It’s true. I went through a couple of rough years a few years back. It was a time where there was more bad than good and seemed like it was never-ending drama, sorrow, loss, confusion, etc… But, with my faith in Christ, my health in tact and a great group of family and friends I got through it. The dead weight started to lift by the second half of last year. I was on a new chapter in my life. I went back to school, got focused and everything started falling into place. January of this year til now has been a whirl-wind and amazing! Since it’s the halfway point of the year I have to look back and reflect at how far I’ve come and all I’ve accomplished. It started out with interning in radio at Clear Channel learning from Brian & LeeAnn- two people I’ve admired in the business for a long time-at 99.5 WGAR. Then went over to Fox 8 and Kicked it with Kenny in the morning. Getting to work in TV, and under my dear friend and mentor Kenny Crumpton, as well as the rest of the morning show team was a dream come true. I learned so much from both my radio and television internships, and feel so lucky to have had both opportunities. After working my butt off between school, interning and bartending on weekends (I don’t miss 24-hr Fridays…), all my hard work paid off and I landed a job with TV20. I started off Freelancing in February, but after working hard to show my passion for broadcasting I landed my own show, Listen Up Cleveland!, which is currently in development. Soon, I’ll be full-time. But with the job I have had the opportunity to cover the Rock N Roll Hall of Fame Induction Ceremony, leading me to interview Alice Cooper  & Matt Pinfield! Two people I have loved and respected-for different reasons-for a long time. I got to be in the press room seeing artists I had dreamed of meeting forever. But you can read the blog on that later. A couple of weeks ago I got to cover the Citadel Freedom of Speech awards where Ted Turner was honored, and I got the honor of asking him a question during the open forum. He blew me away. Plus, I got to interview Connie Schultz who is a shero of mine. She told me how excited she was for me and proud she was of me. I’m getting choked up just writing this. 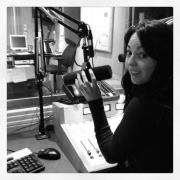 Aside from that, I have tried so many new things: Cirque Du Soleil Ribbon Class, tried DJ-ing a party, learning to be a producer, tried foods I hadn’t tried before, went on dates with guys I may never have given a chance before…it’s been quite a year. I celebrated my Polish heritage on Dyngus Day, got to see Cirque Du Soleil for the first time (thanks Kenny!), landed a spot as a Glambassador for Glamour Magazine, emcee the Lube Jams Rock Wars Battle of the Bands and went back to yoga. A few things haven’t completely changed. I’m back for my 4th season with the Cleveland Gladiators, but this time we are owned by Dan Gilbert. So I get to be back with the Cavaliers family! Also I went back to bartending on weekends at Whiskey Island, which is my second home. I have made so many amazing new friends, cut out the energy vampires, and although I have lost a few loved ones already this year, I have become even closer to my family.

I turned 29 back in April and I was paranoid about it. Why? I dunno. I was more fearful of 29 then I am of turning 30 in like 10 months! Well, at least for now lol. But, so far 29 has been crazy amazing! The next 6 months are going to be just as nuts. I officially graduate from broadcasting school in 9 weeks, have my brothers wedding right after that, start full-time in the Broadcasting industry, and Lord knows what fun, new things I’ll try! I feel like I have finally found the pot of gold at the end of the rainbow. I have grown so much emotionally, spiritually, mentally. If the world really is ending in December, this has been a pretty good way to go out. And at least I won’t have to worry about turning 30. 🙂

I'm a Broadcast professional born and raised in the home of Rock n' Roll- Cleveland, Ohio. I love anything pop culture related, sports, spending time with family & friends, traveling and trying new things. I'm also a huge supporter of independent restaurants, local designers and artists. Hope to inspire you to try new places and things, achieve your goals and to follow your dreams!! Feel free to send me your recommendations for things to do and places to go!! xoxo View all posts by Leah*